In Albuquerque, the housewife Sheryl Hoover brings her suicidal brother Frank to the breast of her dysfunctional and bankrupted family. Frank is homosexual and expert in Proust, and tried to commit suicide when he was rejected by his boyfriend and his great competitor became renowned and recognized as number one in the field of Proust. Sheryl's husband Richard is unsuccessfully trying to sell his self-help and self-improvement technique using nine steps to reach success, but he is actually a complete loser. Her son Dwayne has taken a vow of silence as a follower of Nietzsche and aims to be a jet pilot. Dwayne's grandfather Edwin was sent away from the institution for elders Sunset Manor and is addicted in heroin. When her seven years old daughter Olive has a chance to dispute the Little Miss Sunshine pageant in Redondo Beach, California, the whole family travels together in their old Volkswagen Type 2. 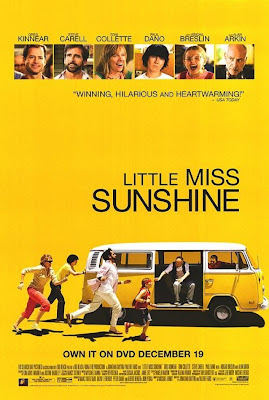