The story is plotted on British ruled India during 1937. Henry Moores (Linus Roache), a spice trader in India was living a princely life in Kerala. He secured a large amount of bank loan to invest it in a road-building project in which T.K. (Rahul Bose) was assisting. This project had to be finished febore the monsoon. In spite of being a family man Moores engaged with his beautiful house-keeper Sajani (Nandita Das) who was also married. When his family came to India Moores became afraid of being caught and asked Sajani to leave the place. Helpless Sajani committed suicide and blame came upon T.K. Eventually the villagers came to know who was the real sinner and forced T.K. to shoot Moores else he would be outcaste. T.K. could not do that, he left servicing British rulers and joined freedom fighting movement.
Though the story is not so strong and by Chekhov's law the conclusion can easily be predicted, still the cinematography is really nice. You will feel to be in Kerala at least! 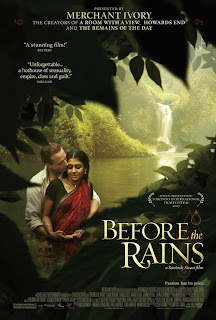