So you have a taste for scathing humor? You love biting satires slyly ridiculing quotidian mindsets and their search for the meaning of life? I present to you "A Serious Man".

The Coen brothers, Joel and Ethan, are getting personal. They shot their new film in suburban Minnesota, where they grew up as sons of Jewish academics. But if you're expecting something warm and fuzzy, circa 1967, you don't know the Coens, and A Serious Man is no country for you. This seriously funny movie, artfully photographed by the great Roger Deakins, is spiritual in nature, barbed in tone, and, oh, yeah, it stings like hell.

A tart, brilliantly acted fable of life’s little cosmic difficulties, a Coen brothers comedy with a darker philosophical outlook than “No Country for Old Men” but with a script rich in verbal wit.

Sy Ableman: I fucked your wife, Larry! I seriously fucked her!

1. As with all Coen brothers movies, there are many allusions in the film. In A Serious Man many of the allusions are Biblical. Larry is a Job-like figure, a good man to whom many bad things happen with no explanation. When he is on his roof, he sees over his neighbor's fence and looks at his neighbor's beautiful wife naked in her yard, just as King David saw Bathsheba. His son Danny's looking at the oncoming tornado recalls God speaking to Job from out of the whirlwind, saying He will not explain why these bad things have happened to him.

2. The Coen Brothers' original idea for the picture was as a short film about Danny's stoned bar mitzvah and his meeting with Rabbi Marshak. All of the other content in the movie grew out of that sequence.  [courtesy: www.imdb.com] 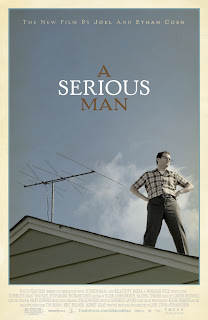